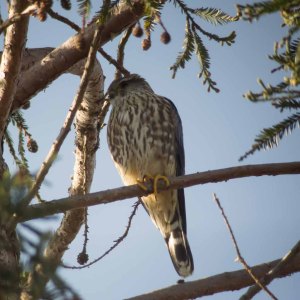 Digiscoped Merlin at 40x with Panasonic Lumix zoomed in

As with last year, we had someone else counting the Ward Creek area but no other help. The temperatures ranged from ~43-66F. It was clear, and by 10:00 it was 59F.

After watching the birds in my yard (a Song Sparrow and Lincoln’s Sparrow that had been hanging around for a while were cooperative and showed up), KP, CB, TB and I started at MB’s place at 9:10, looking for the two White-throated Sparrows spending time there. A Black-crowned Night Heron flew over. In the front trying to get a glimpse of the Red-breasted Nuthatch, pine nuts in their hard shells sprinkled down from birds working the cones. We spent 70 minutes there, observing 63 individual birds!

We headed to Don Castro next, this time entering from the back side off Ursa. We started at 10:20 and hadn’t even gotten down the downhill path when we noticed a raptor in one of the tall trees lining the driveway. We spent an hour observing it and noting the field marks. Along with the White-throated Sparrow, Merlin is another bird that still requires documentation on the rare bird report. Fortunately, other people on the count also saw them elsewhere, so I didn’t have to write those up.  There was no sign of the Golden-crowned Kinglet that I thought I heard (but didn’t see) on 12/10 in that same area.

We took the loop counter-clockwise around the lake. On 12/10, we saw a couple of deer, the first time we’ve actually seen more than scat there. We heard one treefrog. It seemed like there were fewer Yellow-rumped Warblers, Song Sparrows, and Northern Flicker compared to other years, but there were many Hermit Thrush. We also missed the Varied Thrush that we’d seen five days earlier. The east side of the lake has continued to fill in, and now there are willows where there was once water.

It was about noon when we crossed the footbridge. When we got to the ridge, we kept our eyes open for the immature Bald Eagle that we’d also seen on 12/10, without luck. A Red-breasted Sapsucker visited one of the pepper trees. I had thought to myself that we hadn’t been interrupted by any maintenance vehicles, when one came around the corner and flushed the sapsucker. That was the start of numerous interruptions throughout the day, especially when we were trying to get looks at or hear something special.

An hour later we reached the end of the dam, having skipped the fishing pier since it was so late. We continued along the south side of the lake to the old willow where the Yellow-bellied Sapsucker had been seen again. We did not see it in the morning, nor on the morning of 12/10, but later in the day we presumed that the sun hitting the top of the tree helped the sap run more easily. When we first noticed some movement, there were two woodpeckers interacting–a Downy Woodpecker, and the sapsucker. After the woodpecker left and the sapsucker had settled down, it pooped.We watched the sapsucker for 20-30 minutes, also trying to get decent documentation photos.  We returned to the car at 2:15, and went for lunch.

After lunch, KP, CB and I covered the Five Canyons Shady Canyon trail. We were there from 3:25-5:00. We found Fox Sparrows here too, besides the other two places we’d been earlier. We heard Varied Thrush call on the way to the pond. We went just past the pond to try to listen for something that sounded like an owl, but were unable to confirm due to some noisy walkers passing by in the otherwise silent mostly bay forest. On the return, there was even less light, but we were able to hear and get dark glimpses of two Pacific Wrens.

Back near the overpass, we found the white-striped White-throated Sparrow with fox and crowned sparrows. Unfortunately, someone walking towards us talking on a cell phone, oblivious of the birds and what we were doing,  scared them off the trail. We weren’t able to confirm that the tan-striped White-throated Sparrow that we’d also seen on 12/10 was among them since by then it was too dark  to discern the marks.

It was much warmer than it was on the 12/10 scouting trip, though the pond was still somewhat iced-over. There were no floating ice pancakes or sheets of ice at Don Castro this time. And, the Shady Canyon trail usually has “fairy fingers” fungi near the pond at this time of year, but since we haven’t had much rain, there were none.

Here are photos from our scouting trips.

The east end of the lake has silted in even more. See this photo from September 2006, and this one from July 2008 (both taken by other people) for comparison to this one that I took in November 2013 from the ridge.  Alameda County Public Works maintains San Lorenzo Creek Reservoir (Don Castro). 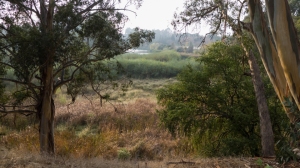