On Friday night, 9/23/11, KG, JO and I led a group of 11 through Skyline Ridge. A few had been on night hikes, and all had been on hikes on these lands before. The weather was mild and warm, probably ~75F after dark. Some high clouds partly obscured the sky throughout the hike. We haven’t done a night hike here since 2008, and even though we added some trails that we don’t hike on much, we were able to keep with the schedule.

We set off at 5:45. There was a lot to look at on the first stretch: A patch with lots of tracks: two tracks of a mammal that we guessed was raccoon, small passerine tracks, perhaps made by a California Towhee hopping, larger walking bird tracks, probably quail, deer, and lizard scat. We looked at a lot of scat along the way–the hard, shellaced bobcat scat, furry coyote, and a few unidentified scats. There were many latrines. Frit flies, as usual at this time of year, bothered us.

We had dinner on the trail above the overlook that leads down to the water tank. The quail flock farther down the trail was also having dinner, like they did on our scouting trip. While we ate, a curious deer popped its head above the quail flock from down trail. Dampwood termite alates fluttered around. 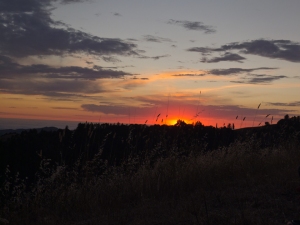 Some heard a Western screech-owl as dusk fell. Lots of harvester ants busied themselves, and we saw two bumble bees and some dragonflies.

We found two centipedes (not stone centipedes) on the downhill past the intersection. We managed not to miss an Iridium satellite flare. 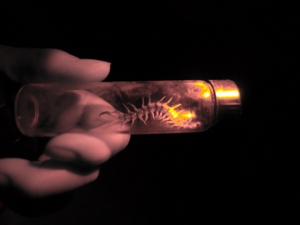 A Jerusalem cricket and Calisoga spider showed themselves on the way to the lake. We looped Fir Knoll, finding many forest scorpions. KG and I found a large moth by its pink eyeshine, but it was too far off the trail in a tree to see clearly. It seemed to be about the size of a sphinx moth, but was perched vertically. As on the first wooded section in the beginning of the hike, there were a few small orb weavers, plus jumping bristletails.

Circling around the back of the lake didn’t produce much except for a large spider hole in the middle of the trail, with a flat collar of live oak leaves (two days later in the daytime, we weren’t able to find the hole). On the way back from the equestrian lot, a large wolf spider carrying babies crossed the trail. I haven’t seen one that large with babies in a long time, last probably at Long Ridge.