In Search of Slime

JO, JH and I had twelve people on our inaugural slime mold hike, including four docents and a biologist-by-training. No one ‘fessed up to being a newbie. At least one non-docent had been on one of our bug hikes, and the (Big Basin) docent had also been on some of our hikes.
The weather was relatively warm, low-to-mid 60’s.

We started out at 12:45, and made a quick stop at the pot-shaped ant nest that we’d seen on the 15th. Turning right at the bench, we gradually headed down into the woods.

Our first slime stop was at a small fallen branch and clump of moss on which we’d found pink sporangia. What was left was puffy capillitium, the netlike structure inside the fruiting body, a darker pink than last week. There we talked about the myxomycete life cycle.
Shortly afterwards we reached the next log and tilting tree where we have found slime molds and other interesting organisms before. The log had small, golden brown round sporangia, and a couple small clumps of white sporangia. On the tree were golden brown slime mold sporangia, possibly the same as on the log, an Ascomycete, Stictis radiata, and some tiny bell-shaped two-toned fungi. The beetle larva that we’d seen on the prehike wasn’t in the same piece of wood. We did find three Slender Salamanders, but no Ensatinas like last week. 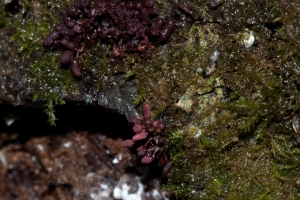 Unfortunately I didn’t recognize the curve near the creek that had a log with small, white, cup fungi with frilly edges and upon examination of the photo I’d taken, had lavender-colored Collembola. There was one small log near a curve that had a tiny, gray fungus edged with white, very pretty. Some of the smaller ones looked like cups, but the larger was flat against the wood. 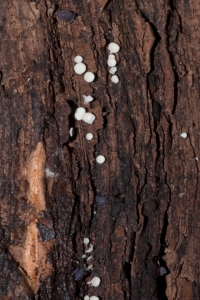 A few more similar slime molds plus one good patch of white balls on stalks, various mushrooms but no slimy “cowboy’s handkerchiefs” as there were a week ago, a black jelly fungus, coral fungi, a resupinate yellow fungus with raised pointy bumps, some brown puffballs, a couple of mushrooms with rodent teethmarks, and Xylaria hypoxilon kept us busy until the creek. We got there around 3:00. The water was a few inches deep at the crossing, but rocks were available for hopping. There were a few newts in the pool, and large Water Striders. The yellow plasmodium that we’d seen last week had crawled off and was nowhere to be found.

Near the fourth bridge, the Toothed Jelly Fungi were still in good shape, and the uprooted reddish-purple Russula that we’d found last week had decomposed to basically flat, white remains that still fluoresced under UV.

Heading up the hill, the stump with Tremella and Stereum was missing the Tremella. The Hygrocybe conica that was bright yellow last week was black today. A Great Horned Owl hooted, and JO found a Shoulderband (Helminthoglypta) snail shell. I’d been hoping for a live snail in lieu of a slug, but we had none. (All the Banana Slugs seem to be at lower Purisima.)

Under a few of the logs were crickets and spiders, including wolf spiders. I also noticed a few flying insects along the way, and last week we got a look at a small robber fly.

We got back around 4:40 and spent a few minutes looking at flatworms in the seasonal puddle near the fire break.

No fungi or slime molds were collected, as this is a preserve. But you can see what we visually collected on this and our scouting hike on 1/15, here.

==
For more on these fascinating and beautiful organisms, see this site, especially the first two pdfs. This site also has a gallery, and this German site has great images.