Girls’ Night Out at Russian Ridge

KG, LJ and I finally started off our small group of 7 participants (originally officially 13 with 5+1 cancellations) at 5:25. We had a few new people, and some had been on a night hike somewhere before.  The weather was pleasant and clear, around 72F, going down to about 63F.

We stopped to point out, without disturbing them, the spider burrow that we’d found and discovered later was a large wolf spider with babies. On our way up to the first flat area, some congealed spider gossamer caught my eye, and another large wolf spider carrying brood sat in the middle of the trail. I debated whether to offer a close-up view (in bug box), knowing that there were arachnophobes, but we asked if anyone wanted to see. After a pause, one person spoke up, then another, so I carefully convinced the mother to go into the box. After viewing, I placed her to the side of the trail. She was actually very calm.

An American Kestrel provided a distraction. Moving on, lots of bird and mammal tracks and even scat kept us busy. A Red-tailed Hawk flew over the ridge. A couple of deer crossed ahead of us.

When we got midway up the Ridge Trail from the vista point entrance, more (as on our scouting hike) disturbing trash showed up. This time, it was pieces of burnt napkin, eleven or more pieces within 1-2 feet of each other. We’d (LJ) picked up many cigarette butts on our scouting trip. Really, fire + dry grass??

Another interesting (at least to those of us who aren’t bothered by dead things) sighting was a dead, intact mouse in the trail. There were some dark marks on the belly, but we couldn’t attribute the death to anything specific.

We had aimed for getting to the deck around 6:40, but with all the things to look at, arrived at 7:10. While we had dinner, the “girls” applied temporary tattoos and fingernail stickers. A bat showed up. We left there at 7:40.

KG found a scorpion, but we didn’t see any others to show the participants. We listened to trilling and chirping crickets, and two different katydid sounds. Someone spotted a large bird flying over, but it was hard to see it against the sky. 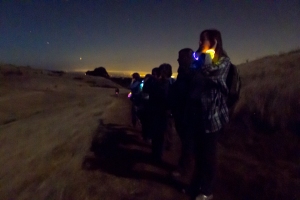 We got to our treat spot early, so we had extra time to sit and enjoy ourselves, about 45 minutes. We left there at 9:15 and got to the vista point entrance in about 10 minutes. Another 25 or so and we were back on Ridge.

The moon was full so stars were faint except for the Summer Triangle. Since we were early and people were interested, we stopped to point some out. I was hoping a Great Horned Owl would decide to perch on the telephone pole near where we had stopped, but after we left there, one sat on the wires as we descended, then moved further away to other wires. I was glad that we’d had some charismatic sightings. We returned a few minutes early.

I forgot to mention the large Jerusalem Cricket.